The Crucible, written by Arthur Miller, is a play that originally premiered in 1953. 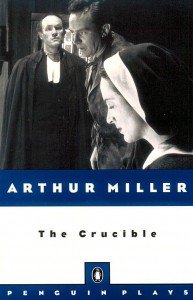 It dramatizes a partial fiction version of the real-life witch trials that occurred in Massachusetts in the years 1692 and 1693.  So how does a play from over 50 years ago, about an event over 300 years ago, still feel relevant today?

The answer comes partly in the play’s original allegorical intentions. Though there weren’t any literal witch hunts happening in the 1950’s United States, there were metaphorical ones occurring as the fear of Communism led to hysteria. Led by Senator Joseph McCarthy, there were Senate hearings to out and blacklist any known communists living and working in the United States. Playwright Arthur Miller made the connections in history to the witch trials and executions that occurred in Massachusetts centuries before.

Today, those correlations can still be made as students see in various forms of media how the idea of fear and hysteria can cause the most rational minded to seek quick answers and find others to blame for the problems at hand.  Because this happens again and again in history, this play inherently can (and arguably should) be examined through modern lenses and taught year after year, to generation after generation.

The emotional back and forth trials of the play lend themselves to ideal scenes that beg to be read and acted aloud. As with most plays, putting the words into action can help students immerse themselves in understanding motivations and allow for close readings.  Encourage students to spend time with their parts before reading/acting them aloud, to fully begin to mine what the characters reactions and actions contribute to the overall meaning of the play. This kind of involvement can also help keep students engaged and motivated as they work through the ideas and themes presented.

This play is a prime example of how metaphor and allegory can be the mode to deliver a message or commentary on a historical issue. Miller wanted to shine a light on the injustice he saw in his time by comparing it to one in the past that had been fully processed and realized as a mistake. This use of literature to expose a modern issue is a valuable lesson that continues to be a crucial point of discussion and understanding.

Modern Accusations – Everything today is in the public eye

Hysteria is nothing new — it may not be witches, but today there are examples in media, politics, and communities where people instantly believe information they are given, before the truth can be fully exposed and understood.  The modern teaching moment with this text comes in how we gather and process information today.  With 24 hour news cycles and social media, accusations are spread instantly.  People are constantly reacting to information, and often times the facts and truths are secondary. By connecting Abigail’s accusations and lies in the courtroom to today’s reality – that anyone can post anything on social media – creates new ways of teaching the themes of the play. It also helps guide students to begin to look at how they react to posts, tweets, snaps, instagrams, and keep an open and critical mind to any information shared.

One of the major themes and storylines in the play revolves around John Proctor’s internal conflicts.  He feels he has wronged his wife, but he also wants to protect his name, and the two come to a head in the play. This is a timeless theme and continues to be found in individuals across the modern media landscape. The choices and sacrifices characters and people make for the greater good can be found and explored in all media. Students can also connect it to experiences their friends may have in their high school life: choosing who to be friends with, what sports or clubs to be a part of, and what students do to create and protect their reputation.  This play is a psychological study with timeless relevance, perfect for any young adult reader.

One reality for teachers is they will always need to find new ways to engage and excite their students, and to help any reluctant reader want to dive into the reading with enthusiasm. So how can they not want to use the witches angle when pitching the play to their students? With the popularity of genre, Halloween, and anything devious, this play comes with a built-in intrigue factor. Sure, there aren’t “real” witches in the play, but the point is many of the characters absolutely believe they could be real, so why not your students?

Use any witchy ideas to engage readers. How about a school-wide witch hunt? Have students try and figure which of their other teachers are witches and have them get signed confessions as pre-reading exercise. (You might want to give your fellow teachers a heads up for this one!)

What are some reasons you still like to teach The Crucible?