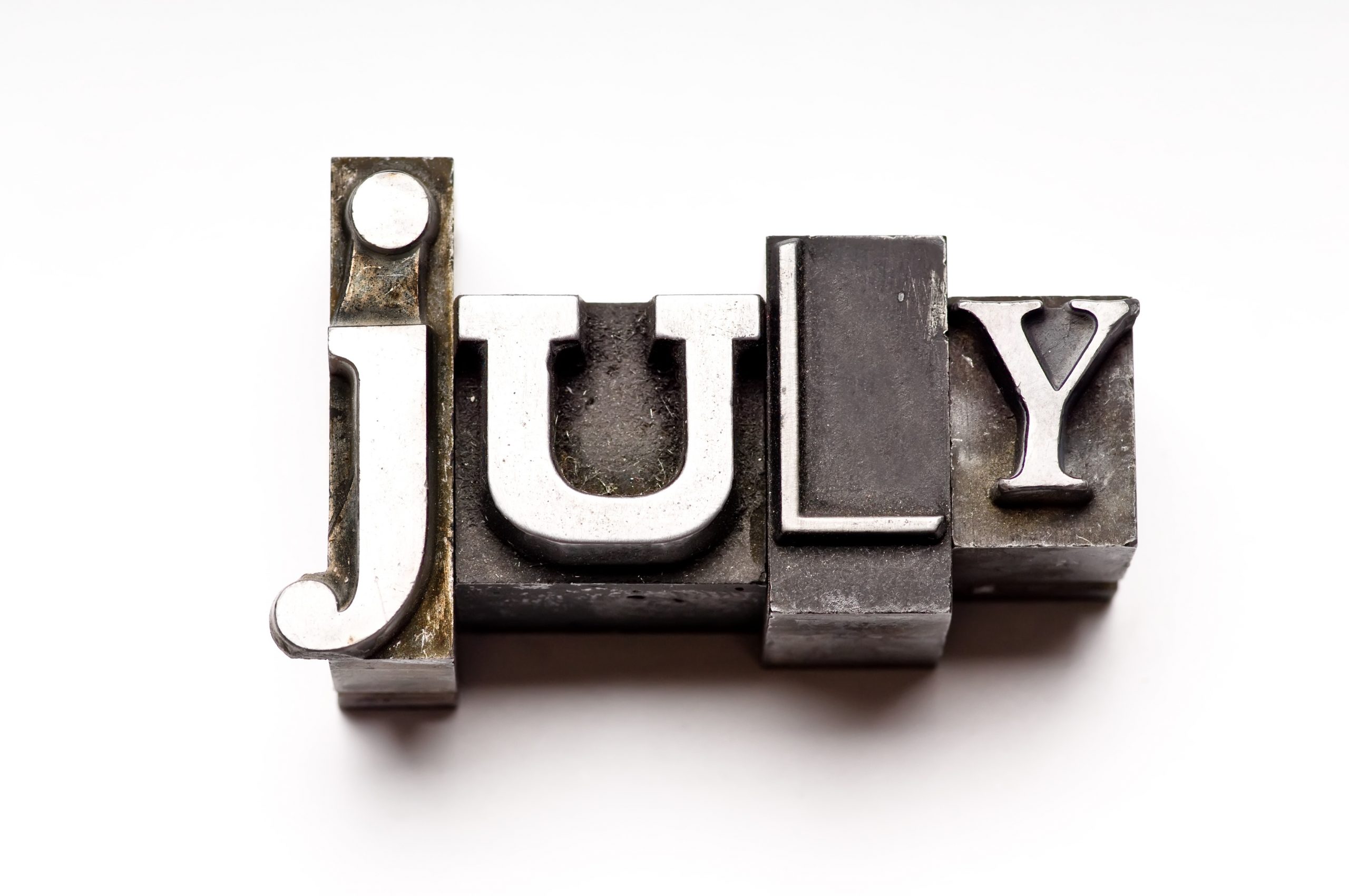 Here is a handy list of some important historical events for the month of July.  Share with your summer school students and colleagues and build lessons around them!

July 1, 1863 – Beginning of the Battle of Gettysburg during the American Civil War.

July 3, 1775 – During the American Revolution, George Washington took command of the Continental Army at Cambridge, Massachusetts.

July 4, 1776 – The Declaration of Independence was approved by the Continental Congress.

July 5, 1810 – Promoter and showman P.T. Barnum was born in Bethel, Connecticut. In 1871, Barnum opened “The Greatest Show on Earth” in Brooklyn, New York. He later merged with rival J.A. Bailey to form the Barnum and Bailey Circus.

July 6, 1885 – Louis Pasteur gave the first successful anti-rabies inoculation to a boy who had been bitten by an infected dog.

July 7, 1898 – President William McKinley signed a resolution annexing Hawaii. In 1900, Congress made Hawaii an incorporated territory of the U.S., until it became a state in 1959.

July 8, 1776 – The first public reading of the Declaration of Independence occurred as Colonel John Nixon read it to a crowd in Philadelphia.

July 9, 1868 – The 14th Amendment to the U.S. Constitution was ratified. The Amendment defined U.S. citizenship and prohibited individual states from abridging the rights of any American citizen without due process and equal protection under the law. The Amendment also barred individuals involved in rebellion against the U.S. from holding public office.

July 13, 1787 – Congress enacted the Northwest Ordinance, establishing formal procedures for transforming territories into states. It provided for the eventual establishment of three to five states in the area north of the Ohio River, to be considered equal with the original 13.

July 14, 1789 – The fall of the Bastille occurred at the beginning of the French Revolution.

July 15, 1918 – During the Battle of the Marne in World War I, German General Erich Ludendorff launched Germany’s fifth, and last, offensive to break through the Chateau-Thierry salient. However, the Germans were stopped by American, British, and Italian divisions.

July 17, 1859 – Puerto Rican patriot Luis Munoz-Rivera was born in Barranquitas, Puerto Rico. He worked to attain a self-government for his homeland.

July 18, 1947 – President Harry Truman signed an Executive Order determining the line of succession if the President becomes incapacitated or dies in office. Following the Vice President, the Speaker of the House and President of the Senate are next in succession. This became the 25th Amendment to the U.S. Constitution on February 10, 1967.

July 20, 1969 – A global audience watched on television as Apollo 11 Astronaut Neil Armstrong took his first step onto the moon.

July 22, 1934 – Bank robber John Dillinger was shot and killed by FBI agents as he left Chicago’s Biograph Movie Theater.  Dillinger was the first criminal labeled by the FBI as “Public Enemy No. 1.”

July 23, 1952 – Egyptian army officers launched a revolution changing Egypt from a monarchy to a republic.

July 24, 1898 – American pilot Amelia Earhart was born in Atchison, Kansas. She became the first woman to fly solo across the Atlantic, and to fly solo from Hawaii to California. She vanished during a flight from New Guinea to Howland Island over the Pacific Ocean on July 3, 1937.

July 25, 1898 – During the Spanish-American War, the U.S. invaded Puerto Rico, which was then a Spanish colony. In 1917, Puerto Ricans became American citizens and Puerto Rico became an unincorporated territory of the U.S.

July 26, 1953 – The beginning of Fidel Castro’s revolutionary “26th of July Movement.” In 1959, Castro led the rebellion that drove out Dictator Fulgencio Batista.

July 27, 1953 – The Korean War ended with the signing of an armistice by U.S. and North Korean delegates at Panmunjom, Korea. The war had lasted just over three years.

July 28, 1932 – The Bonus March eviction in Washington, D.C. occurred as U.S. Army troops, under the command of General Douglas MacArthur, Major Dwight D. Eisenhower, and Major George S. Patton, attacked and burned the encampments of unemployed World War I veterans. About 15,000 veterans had marched on Washington, demanding payment of a war bonus they had been promised. After two months’ encampment in Washington’s Anacostia Flats, forced eviction of the bonus marchers by the U.S. Army was ordered by President Herbert Hoover.

July 31, 1790 – The U.S. Patent Office first opened its doors. The first U.S. patent was issued to Samuel Hopkins of Vermont for a new method of making pearlash and potash.